I’m not sure if this has ever happened to you:

You hear from a friend, who heard from a relative, whose friend’s friend visited Japan after the earthquake and when she returned to Singapore, she felt ill, went to the doctor’s and was diagnosed with radiation sickness.

She would then have to take 12 pills every day. For the next 3 years. She is to abstain from giving birth for the next 5 years for fears of transmitting the radioactive materials to the baby.

I have heard stories like that many times, from many different people. It sounds scary, and has also kept many people away from traveling to Japan. I have two close cousins who actively refuse to come to Japan for that reason, even though they had every intention of visiting Japan if not for the earthquake.

People who tell me the stories ask me if I’m worried, returning to Japan like that. I have always replied a straight no.

My reply always draws a raised eyebrow or two.

Heck, I was HERE in Japan when the earthquake occurred. If anything, the chances of being struck with radiation sickness would have been highest then. But that aside, I’m quite skeptical of these stories being real.

For the sake of argument, let’s assume that these people in the stories exist. I’m always told they visited Tokyo.

Not even the directly hit areas, but Tokyo.
For a few days.

Distance between Tokyo and Fukushima: More than 300km
Time lapse between holiday and earthquake: At least a few months

I don’t see how that’s even possible, unless… they happened to eat a piece of sashimi from a super-radiated fish that was waiting right under the plant when the water leaked.

Or maybe a single speck of highly radioactive debris from the plant floated all the way from Fukushima, landed on a roof in Tokyo, waited for said person to pass by below before falling at that exact moment for the person to inhale.

In which case, they are really super duper, unbelievably, ultimate suay and I feel very sorry for them indeed.

Seriously though, Singapore’s Ministry of Health official statement on this radiation sickness business is this:

Have there been confirmed reports of cases of radiation sickness due to travel to Japan?

You can read the full MOH FAQ here.

SEE! No reported case! Unless you wanna say doctors are not doing their job in reporting or MOH is covering up? Then there is no sense in talking sense with you. I’m moving on.

On my part, I have also done my due diligence. I bought a Geiger counter to monitor the radiation levels. What it does is to measure the number of radioactive particles that hit the sensor per minute. The unit is CPM – Counts per minute.

Yes, there is measurable radiation in normal air, not just air of post-nuclear meltown countries. Radioactive air coming out from the ground, cosmic radiation, even the food and water you ingest all make up background radiation.

I measured the air in Singapore out of curiosity. The CPM reading hovered in the 30-40s range. I thought that was normal.

Until I came to Japan.

Lo & behold! The reading in Japan: 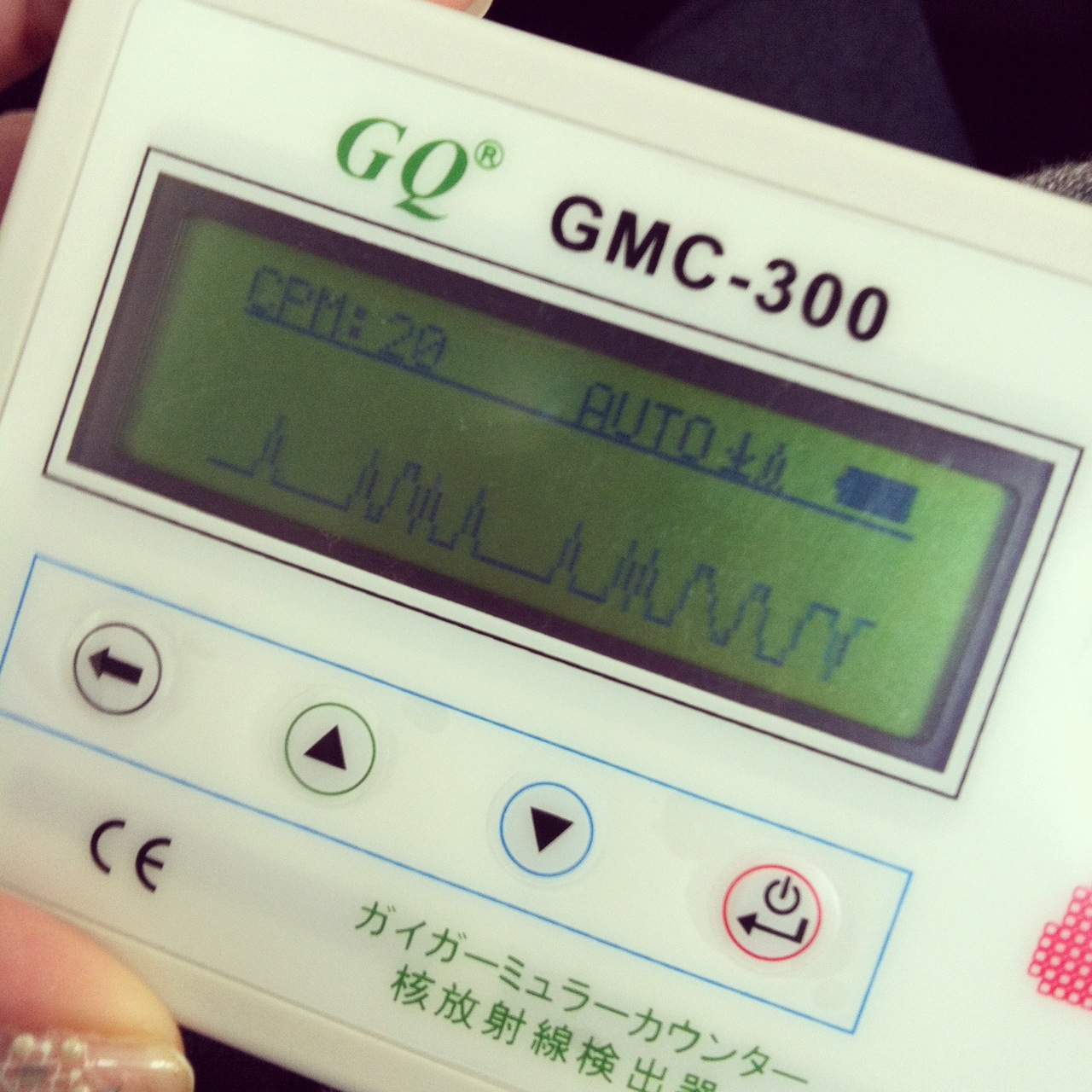 I was quite surprised and measured it multiple times, in different areas. In Tokyo, in Saitama,  but they never vary too much. The readings rarely go beyond 30, if at all.

Well, these creatures swim around in the seas that are connected, you know? And the water? Flowing freely without obstruction! Who’s to say they won’t find their way to your plate or cup ;)

In closing, I would like to remind people that everyone is exposed to radiation in their daily life. For example, a round-trip via airplane between Tokyo and New York exposes a person to ~200 microserviets of radiation, equivalent to 6 months of exposure in Tokyo (going by the current readings).

I don’t disagree that it’s up to the individual to manage the radiation they expose themselves to. But some people forget -or worse, unaware- that there are so many other sources of radiation, not just that from nuclear plants.

It would be nice if people knew this and kept it in mind.