Chest pains and seeing a doctor in Japan

I have been having chest pains on and off for as long as I can remember.

The pain will come suddenly – I can be in the car (when we had one) doing absolutely nothing but breathing, standing up from the couch, talking… there is really no pattern  – and I will be gripped with a sharp pain in the chest.

It will hurt when I try to do deep breathing, but the pain will disappear soon after, just as suddenly as it came.

I’ve seen many doctors in Singapore but they just wave me off dismissively, saying it’s “normal”, “no cause for worry” and that “maybe it’s a muscle pull”.

I’ve long given up finding out the cause and simply living with it, but lately the pain seems to be concentrated around the heart area, and occurring in higher frequency. I have greater faith in Japanese doctors, plus it’s a good time to utilize the health insurance benefits that Fu has been paying for every month, so we trooped off to the doctor’s on Tuesday.

The reason why I like Japanese doctors is because they are not just GPs. Almost all of them are specialists in a certain field.

For instance, if you have skin trouble, you go to a 皮膚科 (Dermatology) clinic. If your ear hurts, you go to a 耳鼻科 (ENT) clinic. So they really know what they’re doing to cure you, rather than just prescribing the standard painkillers, antibiotics and MC.

Although… I imagine it must be quite awkward if there’s trouble in more than one spot. What if you have both skin and ear trouble? I think in that case, maybe going to a hospital is best.

There are so many specializations: 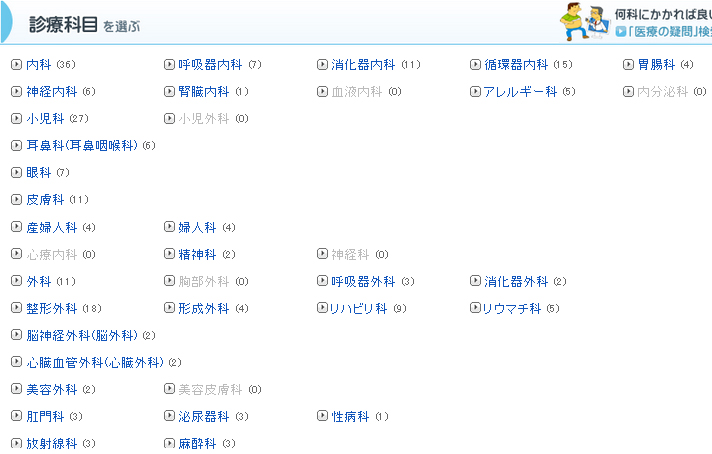 If you cannot find one that fits your needs, then do what I did. I went to see a 内科 (Internal medicine) doctor. It also helps that the doctor specialized in both 内科 and 循環器科 (Cardiology).

We arrived at 8.50am (clinic opens at 9am), and found that the doctor was already seeing patients! We were 4th in line, so we didn’t have to wait too long.

After speaking to the doctor, he ran the usual stethoscope hearing routine. Nothing out of the ordinary.

He proposed doing an x-ray and ECG so as to investigate what’s going on, and I was whisked to the waiting area. Within a few minutes, I was called in to take the x-ray.

The doctor came in personally to take the x-ray and while I was waiting for them to confirm that the x-ray is ok, I heard them ooh-ing and aah-ing over my spinal implant that appeared on the film. Lol. Kinda strange hearing a doctor sound so fascinated.

No problems with the x-ray, and I was immediately ushered into another area to take the ECG.

It was my first time taking an ECG so I didn’t know what to expect, but basically, the nurse just alcohol-swiped me, attached these metal clips to my ankles and wrists, and metal sucker things to my chest.

And I just laid there, trying not to make eye contact with the nurse because I was lying there topless and vulnerable with metal contraptions attached to me. Haha.

It was over in a couple of minutes (thank goodness!) and I quickly dressed.I waited just a bit more and got to see the doctor again. I love the almost-negligent waiting time!

He explained the x-ray and readings on the ECG to me, and told me that everything looked normal.

Of course the question that immediately popped into my head was “If normal, then why pain?!!” (I phrased it politely to him of course :D)

He had two theories:
1. Acid reflux up the esophagus, which is near the heart, that makes it feel like the heart is the one in pain
2. Nerves around the chest/heart are injured, possibly from my previous operation

I’m more inclined towards the second one, because acid reflux sounds like something more with a pattern (eg. before or after meals), whereas mine just occurs randomly. In addition, I have also have a previous history of nerve inflammation, so (2) sounds very likely.

He said that without looking at the heart itself, this is as far as he can postulate.

Please note that up to this point, everything was done in Japanese, with a few sparse English words and diagrams thrown in to make everything comprehensible.

But when he tried to tell me how to “look at the heart”, I really could not understand what he was saying.

I picked out “on” and “pa” amidst the babble of sounds and could not think of anything else but Willy Wonka’s oompa loompa.

It was like I suddenly could not understand Japanese!

Then he wrote it out: 超音波 (cho on pa) and I instantly understood he was trying to say ultrasound. Goodness! Haha.

I had to return the next day at 8.30am to take the ultrasound. That also explains why he was already seeing patients before the clinic opened at 9am!

I paid for the consultation and test fees for that day, and guess how much it came up to?
– Consultation
– Chest x-ray
– ECG

It’s quite nice that under the health insurance, we only need to pay 30%. The rest is subsidized by the government.

Well, we also have to pay about $600 a month for insurance+pension. But still… it’s quite shiok when we get to utilize the benefits.

I mean, in Singapore we pay more than that for consultation alone! FOR A GP. This is a specialist!

Fu also told me that the older people get, the lesser they pay. As low as 10%! You’d think it’s the opposite!

Long story short, I went back the next day for ultrasound. Again, my first experience doing an ultrasound, and it was so weird seeing my heart beat on that screen, and the valves opening and closing.

SO. WEIRD. And scary.

It looks so mechanical and feels like it’s so easy to wear and tear! >_<

After a while I got bored of the black and white images, but the doctor continued examining the screen intently, digging the scope into my chest and shifting it ever so slightly now and then.

He printed out lots of images, and I even got to keep one strip! Yay!

Basically, heart is healthy too, which is good news.

Bad news is that it’s most likely nerve injury, and there’s no cure for that. There is only prevention, which is the taking of Vitamin B12, and the doctor is not even convinced it really helps. Sigh.

So in the meantime, when it hurts, it hurts. I can only wait for the pain to pass. But hey, at least there are no problems with the heart, which was my main concern.

Fat cheeks and the dentists