This was suggested by Fu, and I thought it was a pretty good idea!

Many people still think that Japan is some kind of super irradiated country thanks to the media’s portrayal as well as all the scaremongers out there.

There are also “stories” of tourists being struck with radiation sickness after visiting Japan, which I wrote about here.

In fact, during the 3/11 earthquake, things are actual pretty normal in the parts of Japan unaffected by the tsunami, but somehow people have the impression that the ENTIRE COUNTRY is like badly-hit Fukushima.

I was far more stressed by friends and family hounding me for details of my safety, pleading with me to return, etc than the actual situation wtf.

This is the official Japan tourism website that talks about the radiation levels in Japan: JNTO website

As you can see, Tokyo is one of the countries with the lowest radiation measurements. But skeptics will say that Japanese government is covering up, etc etc.

“How can Japan’s radiation level be higher than my own country’s?! IMPOSSIBLE! Japanese govenrment must be lying! Blah blah blah.”

These people… shove the facts in their face but still, they will choose to blindly believe the misconceptions that have established themselves as truths in their minds.

I guess their world really might fall apart if they have to accept that the fact that the place they are living in is more contaminated than a country that has had a nuclear meltdown!

Anyway, what I am going to do is this:
I will periodically post up the current radiation level readings in the sidebar of the blog, using a geiger counter I bought (with my own money!)

The measurement unit is CPM (counts per minute). According to GQ’s website:

The following CPM data is measured by GMC-300:

To start things off, here’s today’s! 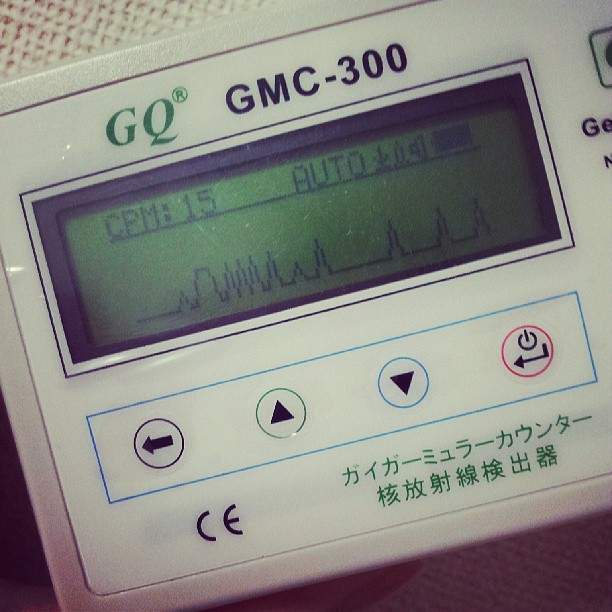 This is an independent project, with no affiliation to Japanese Tourism Board (I wish!) or any other organization.

The tourist places (some of which I frequent) will be less crowded! And don’t have all these annoying tourists that don’t know how to follow Japanese culture like keeping to the left when on the escalator, etc and in turn pissing me off.

But I hate that there are these ridiculous and ignorant scaremongers out there blabbing lies! Omg, idiots really make me so angry!!!

I also hate that my beloved Japan is being slandered and having such a bad rep, and I would also like more (nice) tourists to see the Japan that I so love.

So here’s my attempt on shedding some truth on the real situation on the radiation levels in Japan (or at least my area) at the moment.

If after all these you choose to think that Japan is overflowing and exploding with radiation everywhere, it’s really easy. Just don’t come to Japan. In fact, it’s a personal plea. PLEASE do not come to Japan.

We don’t want to contaminate that perfect, intelligent and rational brain of yours now, do we? :)