Two years has passed since the tragedy of the March 11 earthquake. More than 300,000 people are still living in temporary housing, and many more had their lives changed forever since. I can only hope that they will find peace in their lives.

We were in Japan when it happened, and I was also keeping a blog. But I couldn’t blog it down then. Nor the period following it.

But I think I’m ready to do it now. 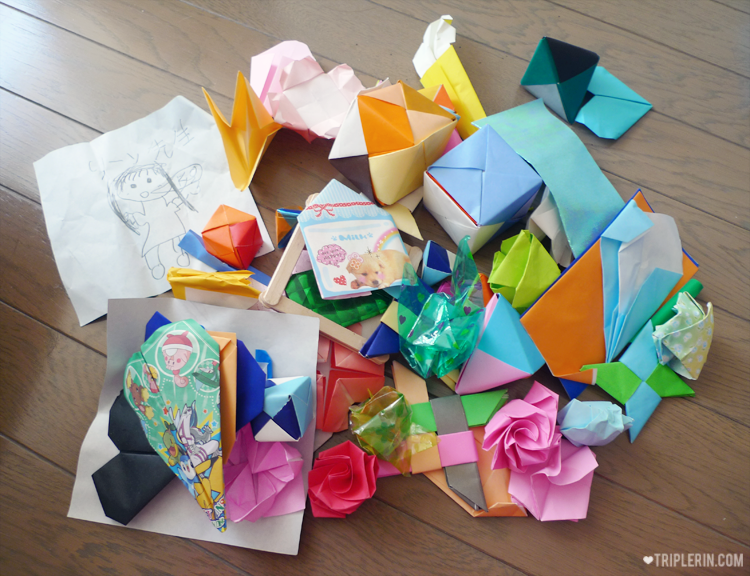 Gifts from my kids that I had to leave behind :(

Although it happened two years ago, I remember the day like it was yesterday.
I was teaching in Japan then, and as I didn’t have any afternoon classes that day, I was in the staff room. Apart from me, only the vice-principal and another teacher were in the room.

The quiet afternoon was soon punctured with the sound of rattling glass and furniture. We looked up from our work and at each other, commenting that the earthquake seems quite strong. However, we didn’t think much of it and went back to our work.

After a while, when the earthquake didn’t show any sign of relenting and in fact got even stronger, we started to sense something amiss.

The vice-principal suggested for us to hide under our desks – a basic skill that elementary school kids are taught so that they can protect themselves from falling objects.

I jumped up and crawled under my desk, and I promptly discovered my immediate problem – The area under the desk was too cluttered (and dusty!) for me to hide.

Half my body and head was sticking out from under the desk, and I was thinking how ridiculous I looked.

The vice-principal must have either heard my thoughts or faced the same problem himself, because within 10 seconds of hiding, he told us to get out.

He stood at the front of the room gesturing for us to go grab the safety helmets from a cupboard in front.

All this while, the ground did not stop shaking.

I ran to the front, hastily jammed the helmet on my head, and the three of us ran out of the staff room towards the open field outside the school building.

The floor was quaking so hard I felt like I was playing a balancing game trying to run forward. I could literally see the floor move like the top of a slow-motion see-saw.

The broom closet door along the corridor was probably not latched because it was swinging open and shut with the motion of the earthquake.

When I finally reached the exit of the building, the first thing I saw made me stop in my tracks.

The lamp post right outside the building was bending left and right, like a rubber pole in the wind.
It seemed so surreal.

We finally made it to the open field and the children were also quickly filling the field. Some of the younger ones were crying, but thankfully the earthquake had stopped by this point.

We waited in the field while the vice-principal tried to establish contact with the principal, who was away on a meeting. However, the phone lines were down and he couldn’t be reached.

While we were waiting, I felt a jump in the ground. My heart almost skipped a beat. It came and went so quickly. Was it post-earthquake imagination? Or was it… a P-wave?

It sparked off a distant, foggy memory of what Fu once told me about seismic waves. Amongst these waves, there are two types of waves: Primary wave (P-wave) and Secondary wave (S-wave).

P-waves can be thought of as going up and down, and S-waves, from side to side. P-waves travel very fast, and will arrive before the S-waves. However, what we experience in an earthquake is usually the S-wave, due to the larger magnitude in displacement compared to P-waves.

P-waves are how animals know earthquakes are coming. If even I could feel the P-waves… how strong did the earthquake have to be?

About a minute later, the usual side-to-side shaking occurred.
The S-waves.

The second earthquake seemed to have jolted movement into the vice-principal, who decided to dismiss school and instructed all students to return to their homes.

All the teachers, including myself, divided up and walked all the students home. Elementary schools in Japan are allocated according to the area they live in, unlike in Singapore where we get to pick which schools to send children to.

At that point, I was still oblivious to how serious the earthquake was.

Despite being from earthquake-free Singapore, I wasn’t worried at all. To me, it was just a larger-than-usual earthquake.

I figured Fu could take care of himself in Tokyo. Besides, his lab had lots of people so he’ll be safe. In fact, I was so relaxed I made my way to a nearby mall to window-shop as well as get groceries after I left the school.

What I didn’t know was that while I was shopping, Fu was beside himself with worry, wondering about my safety and trying to reach me on my handphone.

He obviously could not get through due to the lines being down. He even called up my school, but that was down too.

When I finally got home hours later, the internet was surprisingly working and I saw all the messages he left me.

I think he almost went crazy from all the panicking. Oops, sorry! :X

He was safe but had to spend the night in Tokyo because all the train lines were suspended.

Thousands of people were stranded everywhere and unable to get home. I guess I was really lucky that I travel to work by bicycle.

By then, I had seen the news. There were tears in my eyes as I watched the footage of the tsunami.

How it rushed inwards and consumed everything in its path.
How cruel and unforgiving it was.
How the destruction it left behind was really just the beginning.

Over the next few days, we watched with increasing uneasiness the situation of the nuclear reactors in Fukushima.

We questioned if we should stay in Japan in face of the uncertainties of the nuclear situation.

We saw shelves get wiped clean – bread, rice, batteries, torch lights, and surprisingly, toilet paper.
I guess hygiene is important, disaster or no.

We read about news on the situation in Japan, which was painted in a far worse light than the truth. It was then that I completely understood the word: sensationalization. We heard (more like were hounded by haha) from concerned friends and family, who were on edge and messaged every time they saw another newsflash. But we most of the time our replies were, “Uh… things are okay here actually…”

Above all, we witnessed the true essence of the Japanese people.

Even in times of disaster, they still queued up orderly and paid for purchases.

They banded together to help each other out. Our area was one of those scheduled for rolling blackouts, to help deal with the shortage of electricity due to the shutting down of nuclear plants.

The plan was for each area to take turns to have complete blackout for blocks of about 4 hours a day. My area never had the blackouts enforced because we were using much lesser electricity than allocated to us. From individual households to small shops to large supermarkets, everyone did their part to reduce consumption.

The rest of Japan forged on with life even while in mourning. The earthquake occurred on a Friday, but I had work as usual on Monday.

Even the “bad” people become good people: The Yakuza.
They may have their motives and agenda, but the fact remains that they got help to the people who needed it, when they needed it most.

After seeing all these, we believe that perhaps Japanese are the only ones capable of this in the whole world. I felt even more attached to the country after this experience.

Fu soon received an email from NUS recalling him back to Singapore. As they were the ones providing him with a stipend every month, he had no choice but to return. He asked me if I would stay or go.

I thought about it long and hard and still decided to stay.

I really loved the country and felt that somehow, the nuclear situation will work out. Or maybe I hoped it would work out. Adding to that, there were also other work-related complications if I were to leave.

Fu was quite upset to hear my reply. He didn’t want to return to Singapore alone. I think partly because he was afraid that my parents will most certainly slaughter him for returning without me.

I was heartbroken and very unwilling, but in face of my family and Fu’s pleading, I made the decision to leave Japan.

I comforted myself with the fact that at least I got to fulfill my dream and live in Japan, even if only for a short while.

Fu promised again and again that he will do whatever he can to bring me back to Japan.

But the truth is, in the moment I decided to leave, I have accepted that I will never be able to live in Japan again.

That you are reading this blog only means one thing… someone went through with his words and kept his promise.

The action itself means the world to me ♥

Working Culture in Japan as an English Teacher