Tokyo has a variety of themed restaurants/cafes; the famous Maid Cafes, its counterpart Butler Cafes, Prison-style, Ninja cafe, Cat cafe… This is one of my favorites!

Alice in Labyrinth is a themed Alice in Wonderland restaurant in Tokyo. 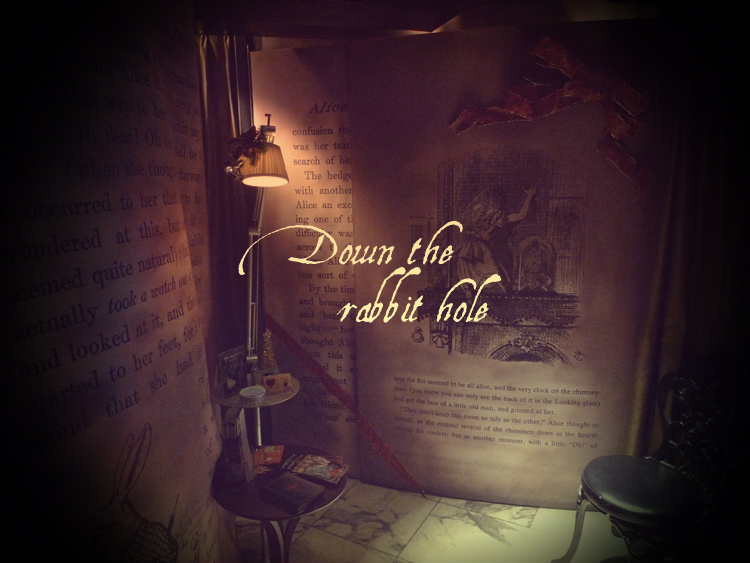 This is scene that greets you when you first exit the elevator. Pages of the book as wallpaper! I love it!

I have to warm you that the whole post I’ll be gushing and abusing the exclamation mark / caps key because I am an absolute sucker for theme-y stuff! :D

Writing this post has also been on my mind for a long time, and even though it’s 4am, I’m still gonna write it! (spent the last hour+ editing the photos -__-;)

I’ve actually been there twice, once in 2010 for my birthday and again in 2012 as a treat for my baby sister. I didn’t blog about it the first time, so I will combine the photos from both in this post. Double win!

The place and menu didn’t change AT ALL, so all photos of the restaurant are very relevant!

I’ll mostly let the pictures do the talking, since they are so theme-y and ♥!

(can you already spot a pattern in how I ended the last… ok, I wanted to say last 5 sentences, but I realized it’s all the sentences hahaha. You’ve been warned!

The first time Fu & I went, we were given a small room. Our door is one of the pages! Haha. It’s quite small, but private and quieter. I say quieter because the ceiling is not covered so sound from other places can still be heard.

No photos I like of me, so to show you the room, I’ll give you one with… God of Gamblers looking to strike it rich in Wonderland. Lol.
That aside, DO YOU SEE THE WALLS??? I squealed when I saw it! Haha. No need to worry about being forgotten in the private room! Use the buzzer provided to get the attention of a serving staff :)

The second time with Zhen, we were given a table in the general dining area, together with other tables. It was considerably noisier than the private room, but still acceptable. Our view
Spot all the little themed touches? Including Alice ;D Dangling acrylic hearts and spades sticks separate us from our neighbours.
I thought they were fixed and leaned on them, only to have them slip from under me and whack me in the face =__= The intricate menu holder! Drinks menu is folded to the side

Open it to find… MAD HATTER! Not a tea menu, but still drinks, and they’re designed like playing cards! So it’s a pass from me! Flip open the description and you’ll see a picture of the drink! Very handy! Food menu! There is a cover charge of 600 yen per person, limit of 2 hours, and each person must order at least 1 drink and 1 food item.
There’s also a set course to the left for those who cannot decide what to eat. The chesire cat… Teehee.
Menu has English (very light pink in the photo) so no need to worry! Anyway, the worst case is just point to photos or other people’s plates and order lol. Chopsticks are also in themed wrappers!

After we placed our orders, they brought us appetizers free of charge! (or you could argue it’s the 600 yen cover charge…)

Ah wait, here’s the ONLY thing I noticed that changed. In 2010, it looked like this: Cheese spread greatly reduced in amount! Even bread also don’t give you the full piece anymore D:
But I love that the “Eat me” card is still there :D

I also love that all the while, you can hear the animation playing in the background. Quite a nice touch! But I wonder if they have to pay royalties to Disney?

Anyway, after a while, our drinks arrived! Dunno why the peach nectar I ordered the first time so ugly! No theme one! Boo hoo. Also no mood to position it and take photo. Only saving grace is that it was delicious. Shortly after, the food arrived! Fried Mochi potato balls! Crispy on the outside, chewy and soft on the inside! Mmm! Salmon and spinach cream stew. This was decent, but if compared to the rest, this would rank lowest. Only because the rest are delicious! Prawn fritter with special yums sauce (cannot remember what sauce la. But it was yummy!) My second visit there, 2 out of 3 dishes ordered were repeated from the first visit. So it’s that yummy!

It’s also 5am now and I’m starting to get hungry. Better hurry up finish and go sleep so that I don’t need to eat!

The first time I went, it was my birthday, so Fu secretly pretended to go toilet, but actually he went to pakat (Malay for conspire) with one of the Alices to bring me… She brought it in with candles by the side (the whipped cream in the corners were the bases) and she and Fu were singing the birthday song.

After that, she also took photos for us (loaning us Alice and bunny headbands lol), which she printed and gave us in pretty, themed folders! The date was wrong though .___. But ok la, I remember it was my birthday can already!

Oh yeah, speaking of toilets (earlier), here is a photo! I also had glimpses into other rooms and hastily snapped photos: With the door opened This is where THE tea party is. The whole ceiling had tea cups and saucers hanging from it! The background is the photo folder!

I recommend this place because it’s quite a nice experience!

To be honest, the first time I was there, I was just there for the novelty and didn’t expect the food to be much good. But it’s surprisingly delicious! Definitely exceeded the expectations I had for it. The food prices are also quite reasonable. 1,200 yen for pasta, 500-600 yen for starters. Drinks are around 700-900 yen. Peach nectar was only 500 yen, cause so ugly :S

If you can’t be bothered or are unable to (speak Japanese, etc), then throw caution to the winds! Unless it’s some special holiday (X’mas, etc) or if someone booked it as a party venue, you should be able to get seats. Don’t quote me on that though. I cannot be held responsible if you don’t get entry into Wonderland!

In short, I recommend this place for a unique experience, pretty good food and still-acceptable price tag.