Have you heard of the magical beauty gadget, Hada Crie? If you haven’t, then lucky you! I’m about to potentially change your skin (and also your bank account).

Hada Crie is pronounced ha-da, which means ‘skin’ in Japanese, and cree-ey as in creation (without the “tion” sound) which means… Skin Creation! Basically: Create the awesome skin you deserve!

I know we hear it all the time: “#1 bestseller this”, “Top-selling that”, but in this case, I think it might actually be true. It’s wildly popular both in Japan and also worldwide (a simple google search will show you that)! 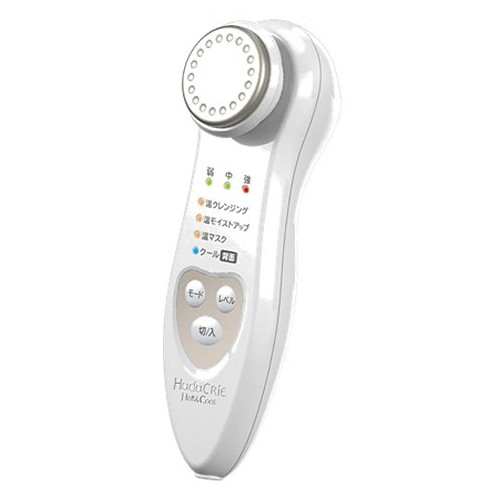 It looks like a plastic toy, but the metal plate is where the MAGIC happens. It releases both positive and negative ions and is what cleanses, moisturize and minimize pores on the skin.

Some people compare Hada Crie to Clarisonic, which I guess can be considered the popular US-made cousin of Hada Crie. However, the abrasive-looking brush of Clarisonic really didn’t appeal to me. 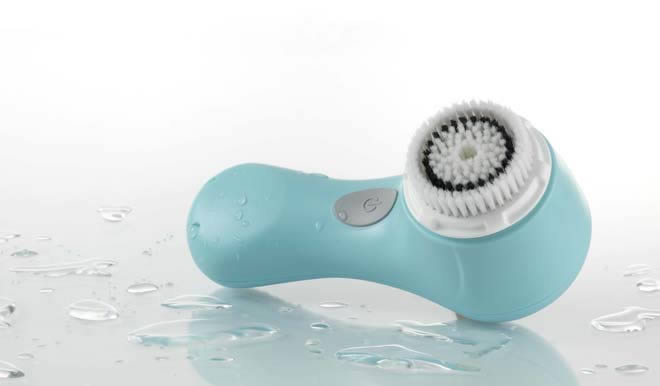 Who? Me? I’m innocent and come in pretty colors!

But there must be a reason why Clarisonic is so popular and maybe if I have a chance, I’ll try it out someday!

I first came across Hada Crie a couple of months ago, and when I researched it, I saw many people raving about it, and their reviews and pictures of how dirty the cotton pads became with the use of Hada Crie made me really want to buy one! 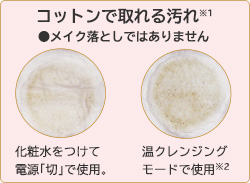 I don’t know if it’s age, but lately, I noticed that my pores are becoming more obvious. Also, my skin has the occasional pimple more than occasionally nowadays. It also doesn’t feel as smooth anymore. I always thought I had normal/combination skin, but when I went to the dermatologist in Singapore, she said I had dry skin! One blow after another. D: I can’t take it anymore!

However, being the great procrastinator I am (plus the price tag was not the greatest motivator), I kept putting buying it off. Until this month, when Fu commented that my blackheads are very obvious.

Now, guys don’t normally notice what girls do. We can get a new hair cut, buy a new gorgeous dress, not shave for 3 months, they won’t even notice, and give the same old “You are always beautiful in my eyes” line. Maybe it’s true, but still. No recognition for our hard work and effort at all!

Heck, I think if I pranced around in a Pokemon costume with purple and green hair, Fu wouldn’t even notice.

BUT HE NOTICED MY FREAKIN’ BLACKHEADS!

That was what made me snap into action to DO SOMETHING about it. So back to Hada Crie browsing. But I couldn’t decide which of the 2 models available I should get. 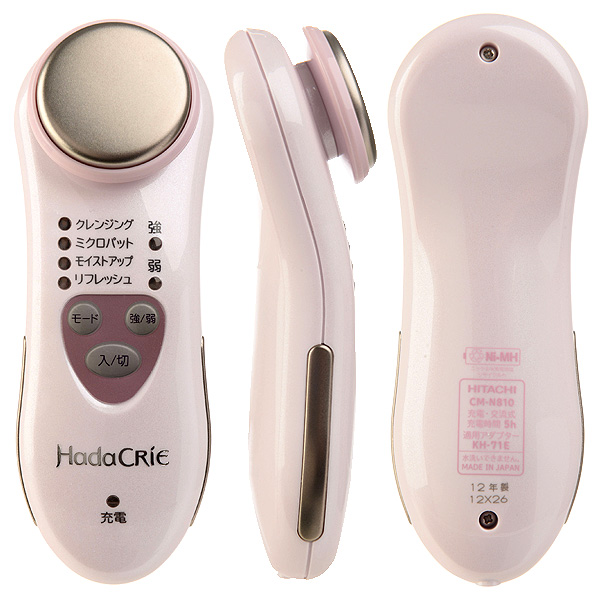 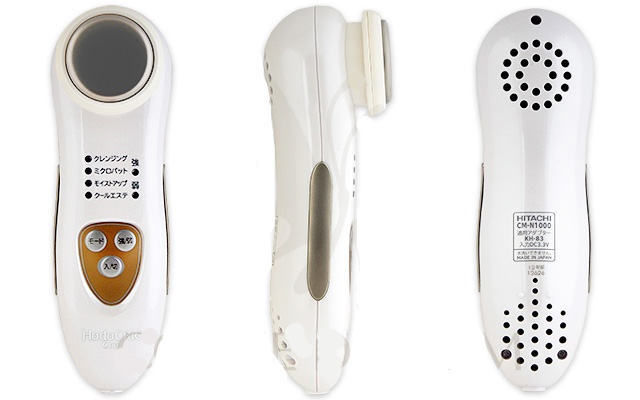 Which one should I buy?!!

It’s not clear cut as the higher-end model simply having additional features over the lower-end one. It also took away things I valued such as wireless ability, worldwide voltage (in case I want to use it in Singapore or when I travel!) and of course, lower cost. Hahaha.

In the end, I sat on it for a few more days as I pondered which one to get. I was determined to buy one! Just that… which one?

Thank god I waited! Because as I was doing more research trying to decide which model to buy, I came across a valuable piece of information…

2 new “renewal” (in Japan, they like to use the word renewal to indicate upgraded, improvised, enhanced… you get the idea) models will be released on May 21, 2013!

At that point when I read it, it was still a few days away, so I thought, since I’ve already waited (ok, procrastinated) so long, what’s a few more days, right?

While waiting, I did more research! Now 2 more models to add to the dilemma: 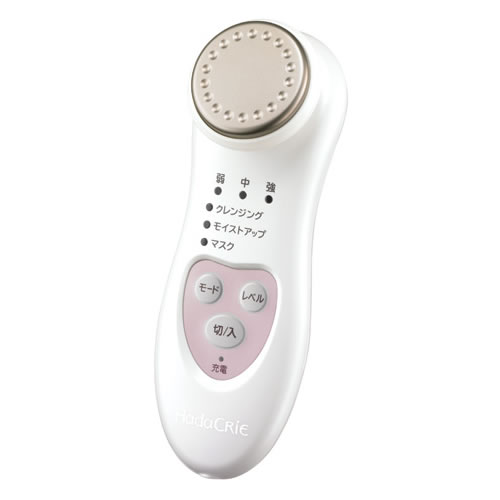 There is a stark difference in price both between these 2 models and when comparing with the older models.

Super ouch, right?! My eyes were O_O when I saw the prices. I cannot imagine how much people overseas have to pay. On eBay, the highest model is going for an average USD 400 right now :O

The thing I was most uncomfortable with was that there were obviously no reviews for me to refer to and make my decision, which is how I usually do things.

So I had to keep asking myself: Are the new models worth so much? Is there really a marked improvement over the older models? And the one that kept sneaking into my head…

What if Hitachi is just cashing in on the popularity and actually it’s more or less the same?

In my imagination, the people in Hitachi are are sitting in a meeting room going:

Boss: Ok, Hada Crie is very popular. How can we increase profit? *drums fingers expectantly*
Employee #1: How about running a promotion?
Boss: NO NO NO! That will only marginally increase profit, on models that don’t even cost that much in the first place! I want new ideas!
Employee #2: How about researching on how to improve Hada Crie even more?
Boss: That would cost us money instead, stupid! *whacks table for impact*
Cunning employee: I have an idea! How about… we take the current models, modify it very slightly and sell it at a high price? Hada Crie has a great reputation, and we can ride on its popularity to convince people that these “improvements” are worth the high price tag. I’m sure people will pay!
Boss: Now THAT’S what I call an idea.
*thunderous evil laughter echoes outward of the meeting room as everyone guffaws like a maniac*

HAHAHA. Overactive imagination!
(Hitachi please don’t sue me! Read on to see why you shouldn’t :3)

To make it easy to compare, I made a table!
(Actually, I only just made the table. I relied upon my mental prowess when comparing. Resulting in back and forth browsing and scrambling all over the place for information. Sigh.)

Might as well make full use of all the time I spent researching, right? Plus, at least it’ll be helpful to you? I know, I’m so nice!

Next, (prepare your tissues) I’m even gonna go one step further and provide an executive summary of the differences between the models. Go ahead. I won’t look while you wipe away your tears of touched-ness.

Freshened up and ready?

Differences between the lower-end (N8xx) and higher-end (Nx000) models

So after being so cheong hei (Cantonese for long-winded) and so much research, which one did I end up buying?

I decided to go for broke (pun fully intended) and bought the CM-N2000.

Ugh. Not better. Let’s just leave it as 29,800 yen. I can pretend it’s fake money. Nothing more than currency I use to live in my dream land Japan. Haha! Besides, I’m in the country that invented instant noodles! I will survive!

Ok… to tell you the truth, I intended for this post to be a first-impression review of CM-N2000. Complete with un-boxing, our “Before” skin pictures, cotton pads after first use, everything. I already painstakingly took all the pictures!

But looking at the length of the post so far… I think that would just kill you and me both.

So I will break it into 2 parts and do the review in a separate post.

For the impatient ones who are dying to buy it and want to know what someone, ANYONE thinks of CM-N2000 (because I know there are absolutely ZERO reviews out there at this point of writing), I had my doubts after the first use, and even thought of returning it.

But now after the third use, I think I’m starting to warm up to it (and perhaps it to me) and I’m quite happy! I look forward to using it every day haha! To the point that I will pester Fu to LET ME do it for him. Yeah, that’s got to say quite a bit about how I feel about the gadget.

Alright, till the review next time!

HERE!
or if in Japan, any major electrical store like Yodobashi or Bic Camera (they carry only the latest models though).

Edit: New comparison post (including the 2015 models) is up!